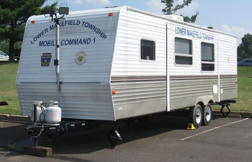 Mobile Command 1 is a 32 foot converted 2006 Keystone recreational vehicle that was acquired from the federal government’s surplus program that is ran for state and local governments. The trailer can be towed virtually anywhere it is needed for on site operations of a major incident or event; it is used yearly at the townships Community Pride Day. The interior of the RV was converted into a conference room, operations desk area and rest area. The exterior of the trailer had emergency flood lights and electrical outlets added and decals were also added to identify it. Also the trailer acts as an on scene first aid station with two functioning bunks and fully equipped restroom. The trailer is also equipped with police radios, laptop computers and associated equipment, maps and any other needed items that would be used during a major incident. The trailer is powered by a gasoline generator and can remain on the scene of an incident for days or even longer if necessary.