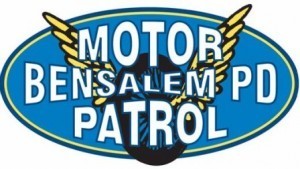 The Motor Patrol is a high profile unit that participates in numerous dignitary and funeral escorts, parades and various community events in addition to the daily operations of maintaining public safety and service. The unit does also patrol the “off-road” portions of the township on ATV’s.

Bensalem’s Motor Patrol unit was one of the first outside agencies to participate in the Philadelphia Police Hero Scholarship Thrill Show. In 2007, past supervisor, Lt. Gladu and his unit coordinated the first “Ride for Heroes.” The annual “Ride for Heroes” is a motorcycle run through Bucks County that raises money for the Bucks County Heroes Scholarship Fund. Over 120 riders participated in last year’s event raising over $3,300.The event was a great day capped off with a thrill show where members of the Motor Patrol performed displays of precision riding and thrilling stunts.

Many families and community members came out to last year’s Fall Festival and witnessed the Motor Patrol’s Motorcycle Thrill show.In case you missed it, the Bensalem High School Audio/Visual Department captured the show in its entirety. Just go to the video page and enjoy.

If you have any questions about Bensalem Motor Patrol, please contact Lt. Robert Bugsch at:  rbugsch@bensalempa.gov