The Bensalem Township Police Honor Guard is comprised of 10 veteran Officers that have been selected to represent the Police Department at ceremonial occasions. These Officers exemplify the Department’s professionalism, dedication to duty, and commitment to service. The Honor Guard attends funeral services of fallen Officers in the tri-state area. The pride, tradition, and attention to detail displayed by the members of the Honor Guard provide the highest show of respect and gratitude for the sacrifices made by fallen heroes and their families. They also participate in law enforcement ceremonies and memorial services. The members of the Bensalem Township Honor Guard are Sgt. Race, Sgt. McGinty, Det. Jackson, Det. Tobie, Ofc. Hill, Ofc. Reilly, Ofc. Bielecki, Ofc. Howard, Ofc. Marshall and Ofc. Broderick.  Ofc. Hill in not included in the Honor Guard unit photo because he was serving in Iraq with the United States Marine Corps when the photograph was taken. 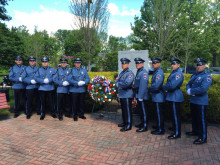