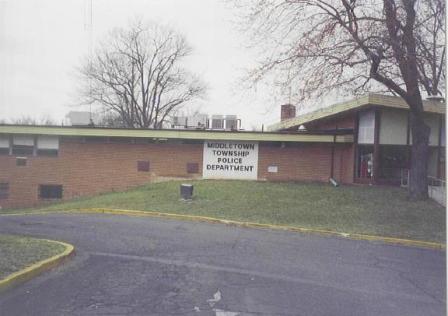 Middletown Township was incorporated in 1692, but it was not until August of 1952 that a full-time police department was established with the hiring of Chief Howard C. Shook. Chief Shook was the first police officer and police chief in Middletown Township. He was sworn in 8/17/1952 and worked out of the township building on Hulmeville Road and West Richardson Avenue. Chief Shook had been with the Pennsylvania State Police prior to taking control of the newly established Middletown Township Police Department. The department's first police vehicle, a 1952 Ford Deluxe, was provided to Chief Shook in October of 1952.

There were no police radios before 1955 so officers had an interesting way of learning the public needed assistance. If the public needed the police then they had to call a number that was answered by an employee of Penndel Body Works. Penndel Body Works was one of the few businesses that was staffed twenty-four hours a day. The police officer had to drive past Penndel Body Works, which was located on East Lincoln Highway where Bucks County International is currently situated, and look to see if a signal light was lit. If the light was lit then the officer knew he had a call. He would then stop in to the business and get the call.

In 1959 the police department was relocated to 700 New Rodgers Road (pictured above). The police department shared space with the township administration in the new building that was built at a cost of $190,000. At the time the department had the only jail with air-conditioned cells in the county. There were fifteen police officers on the force when they moved into the building. In 1965 an addition was added to the building but it was still shared by the township administration.

In 1982 the township purchased a new building at 2140 Trenton Road and moved the township administration offices to that location. The police department then took over the entire building at 700 New Rodgers Road (later renamed Veterans Highway).

In March of 2002, both the police department and the township offices were reunited again in a new municipal center located behind the Shoppes at Flowers Mill on Municipal Way. The new facility houses a state of the art multi-media training room, and an indoor firing range and is home to 53 full time police officers and administrative staff.

In 1983 Chief Howard Shook retired after more than thirty years of service. Chief Shook had served as President of the International Chiefs of Police Association and was a respected member of the law enforcement community. By 1983 the police force had grown to 45 sworn officers, including the Chief, (6) Lieutenants, (3) Sergeants, (5) Detectives and (30) Patrol Officers. Lt. James Duncan was named the Acting Chief of Police from 1/1/83 until 8/2/83 when Chief Michael J. Chitwood was named the department's second Chief of Police.

Chief Chitwood had previously been a homicide detective in Philadelphia and was the most decorated officer in that department's history. He served as Police Chief from 8/2/83 until 4/1/88 when he left to become Chief of Police in Portland, Maine. Lt. Frank X. McKenna became the Acting Chief of Police and in 1989 was promoted to Chief.

Chief McKenna was hired in 1957 and worked his way up through the ranks of the police department. He established most of the neighborhood watch associations that exist in the township. The department also established a bicycle patrol and Special Response team under his leadership. He retired in January of 2009 after achieving  the legacy of longest serving police officer in Pennsylvania history.

In 2010, Lt. James Kane was promoted to Chief of Police and recently retired in June of 2014 after 35 years of service. Chief Kane was responsible for the department attaining its current Accreditation status. He was also the township's first D.A.R.E. Officer.

In the sixty-four years of its existence the department has grown from one officer answering calls from signal lights to over fifty officers using digital radios and personal computers in their vehicles.