Eisenhauer was among those honored at the Law Enforcement Partner Agent Awards in Philadelphia where Assistant U.S. Attorneys had the opportunity to recognize and thank the agents from various federal, state, and local agencies who investigate cases for prosecution.

The collaborative investigation by the Bucks County District Attorney’s Office Drug Strike Force and the Drug Enforcement Administration in 2018 took down the Skipworth drug trafficking organization.

“I’m proud of Detective Eisenhauer for the role he played in dismantling the Skipworth drug organization,” District Attorney Matt Weintraub said. “We are all safer as a result of his efforts as a member of our elite county drug strike force. Congratulations Detective Eisenhauer!”

Damir Skipworth, the leader of the drug ring, and his associates were responsible for the distribution of hundreds of pounds of methamphetamine, thousands of doses of fentanyl, and large quantities of cocaine and other drugs in Bucks, Philadelphia, Berks, and Delaware counties.

The investigation included a 4-month wiretap on multiple phones and resulted in the dismantling of the drug ring, the seizure of large quantities of drugs and firearms and lengthy prison sentences for every member charged.

Colleagues at the District Attorney’s Office congratulated Eisenhauer on the recognition with Chief County Detective Martin McDonough saying, “I am extremely proud of the work all of our detectives do.”

“Detective Eisenhauer’s work on this case is an example of the good work they do,” he added. “I thank the U.S. Attorney’s Office for acknowledging his dedication.”

Eisenhauer was nominated by Assistant United States Attorneys Christopher Parisi and Andrea Foulkes, who prosecuted the case and was presented a Certificate of Recognition by Jennifer Williams, the Acting U.S. Attorney for the Third District of Pennsylvania.

Deputy Chief Michael Mosiniak, the head of the Detectives Drug Strike Force said, “I am proud to have Detective Eisenhauer on our team.”

“This is another example of outstanding work accomplished by members of the Bucks County Drug Strike Force and excellent teamwork with our federal partners.” 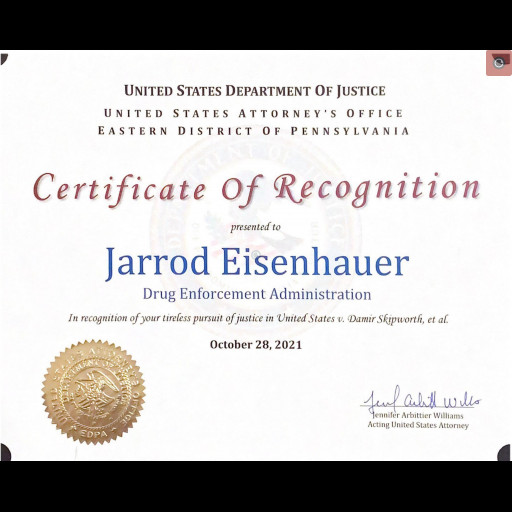