The Bucks County Commissioners and the District Attorney have filed a joint lawsuit against several manufacturers of dangerous PFAS that have contaminated water and soil in Bucks County.

Filed Tuesday in the Bucks County Court of Common Pleas, the suit seeks civil fines, penalties and restoration under Pennsylvania’s Unfair Trade Practices and Consumer Protection Law, as well as damages for the investigation, remediation, removal, disposal, treatment and monitoring of ongoing PFAS contamination in the surface water, groundwater, soil, sediment and other natural resources within the county.

While the Commissioners and District Attorney have brought separate causes of action, they have coordinated their efforts in a single filing to best hold the defendants accountable.

“We’re bringing this action on a unified, bipartisan basis, because as your elected officials we have a duty to protect the people of Bucks County, and to conserve and maintain the county’s natural resources,” said Commissioner Chair Bob Harvie, who verified the lawsuit filed by the county’s Law Department.

The suit alleges that PFAS were released into soil and water when firefighting foam products and chemicals contained therein, manufactured and sold by the suit’s defendants, were used in Bucks County. Because they do not biodegrade, PFAS are sometimes referred to as “forever chemicals.”

Though the companies named as defendants largely stopped producing the PFAS-containing aqueous film-forming foam (AFFF) products, recent testing at the county’s Public Safety Training Center in Doylestown Township, where AFFF was used many years ago, confirmed the continued presence of those PFAS in water and soil samples.

Abbreviated PFAS, per- and polyfluoroalkyl substances appeared commonly in many nonstick, stain-resistant and waterproof products, including the AFFF products used to fight fuel fires.

PFAS are highly water soluble, which causes the chemicals to spread easily and contaminate soil, groundwater and surface water.

Certain PFAS can cause adverse health effects including, but not limited to, decreased fertility and increased high blood pressure in pregnant women, developmental effects or delays in children, increased risk of certain cancers, and increased risk of high cholesterol and obesity, according to the U.S. Environmental Protection Agency.

Advisory levels of PFAS in water have long remained at 70 parts per trillion, but ongoing efforts by the state Department of Environmental Protection seek to significantly reduce those levels. The public has until April 27 to comment on the state’s most recent proposal.

“While we will continue to investigate and study the health effects of these harmful chemicals, the time to hold these companies accountable is now. They knew that their firefighting foam products contained these toxic substances when they peddled them, and that they were dangerous even when used properly,” Harvie added.

“These companies interfered with our rights to public health, safety and peace, and the right to pure water and to the preservation of the natural environment,” said District Attorney Matt Weintraub. “As District Attorney, I am dedicated to protecting the county and its residents from the deceptive and unfair acts and practices of the manufacturers of PFAS in connection with their marketing and sale of products containing these undisclosed ‘forever chemicals’ to entities throughout the county.”

“The health and safety of the citizens of Bucks County is our top concern,” he said.

“This lawsuit is about more than the county’s substantial rights as a property owner,” said county Solicitor Joe Khan. “This is about enforcing the people’s constitutional right to pure water. These corporations need to pay for their outrageous misconduct and this lawsuit will help make sure that they do.” 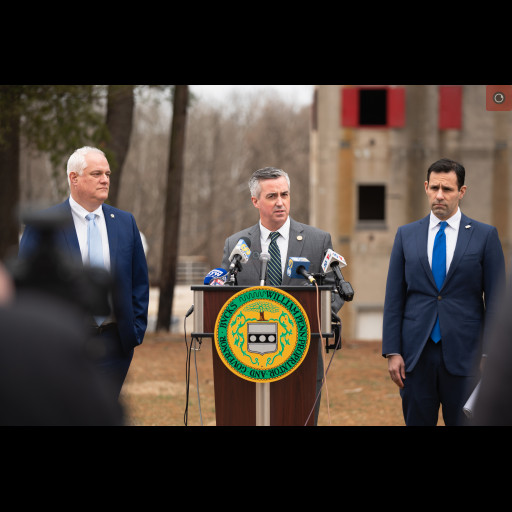