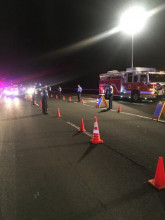 The Warrington Township Police Department is an active member of the Bucks County DUI Task Force and the Montgomery Township DUI Task Force.  The Department currently has twelve specially trained officers which are on the task force who participate in both roving and stationary DUI checkpoint patrols.  Warrington Patrol Sergeant Gottenberg is the supervisor and a task force leader on the Bucks County DUI Task Force.  Highway Unit Corporal Neipp is a supervisor on the Montgomery Township DUI Task Force.  The DUI checkpoint details usually coincide with designated holiday periods and the roving patrols are usually performed during weekends.  These details not only serve as a means to apprehend offenders that are impaired by alcohol, prescription medications or illegal narcotics, but as a high visibility deterrent which improves the safety of our roadways.  The Pennsylvania Department of Transportation (Penn Dot) funds the task force with a federal safety grant.