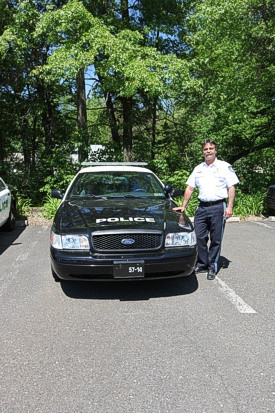 The Plumstead Township Police Department is comprised of sixteen full-time police officers. In addition to the uniformed officers, the department employs three civilians (non-uniform, two full time and one part time) and a part-time crossing guard.

The police department is divided up into three categories:
Administrative, Investigative, and Patrol.
Within the patrol division, there are additional sub-divisions.

The Sergeant oversees the corporals and monitors the efficiency of their patrol squads. The Sergeant also maintains and schedules grant details, assists with scheduling and monitors the repairs to our police vehicles. Additionally, Police administration manages the Township's computer systems and public safety record keeping.

A crossing guard is employed on a part time basis to assist with traffic control on Burnt House Hill Road. The sole responsibility of the guard is to secure the safety of the children that walk or ride their bicycles to the Gayman Elementary School.

Patrol Division:
The patrol division is the largest, most active and most important part of the police department. They are the first-line officers that deal with the public on an everyday basis. The structure of the staff is currently made up of the Chief, fifteen (15) officers which includes one (1) sergeant, four (4) corporals, one (1) detective, and nine (9) patrol officers. All of the officers within a patrol division are responsible for the daily service calls, traffic accidents, traffic enforcement, and residential & business patrol. They act as juvenile officers and run the Central Bucks Youth Diversion Program; Explorers Post and are detailed to many Community Policing details such as bicycle safety programs and bicycle rodeos.; have a bicycle patrol unit; a specialized Traffic Accident Reconstruction Unit; and a Truck Safety Inspection Unit. Officers are assigned to the County MIRT (Major Incident Response Team) Team - a 125-man field force. Officers are also assigned to the SRT (Special Response Team) SWAT.