Corporal Paul Deppi, Officer Nicklaus Whitney, and Officer Nicholas Ciambrello received Commendations for Life Saving for their exceptional actions on February 25, 2020, that undoubtedly saved the life of a fire victim. The collective effort began in response to a dispatch call for a structure fire involving an apartment on Diamond Drive. It was reported that a blind victim was still inside. Patrol quickly responded and assessed the situation. The individual was trapped inside the residence, which was fully engulfed in flames and producing heavy smoke. They proceeded to break through the window of a bedroom and took turns calling and reaching for the victim. Despite the substantial risk to their own safety from the heavy smoke condition and heat levels, they each continued until the victim was located and pulled through the window and relocated to safety. 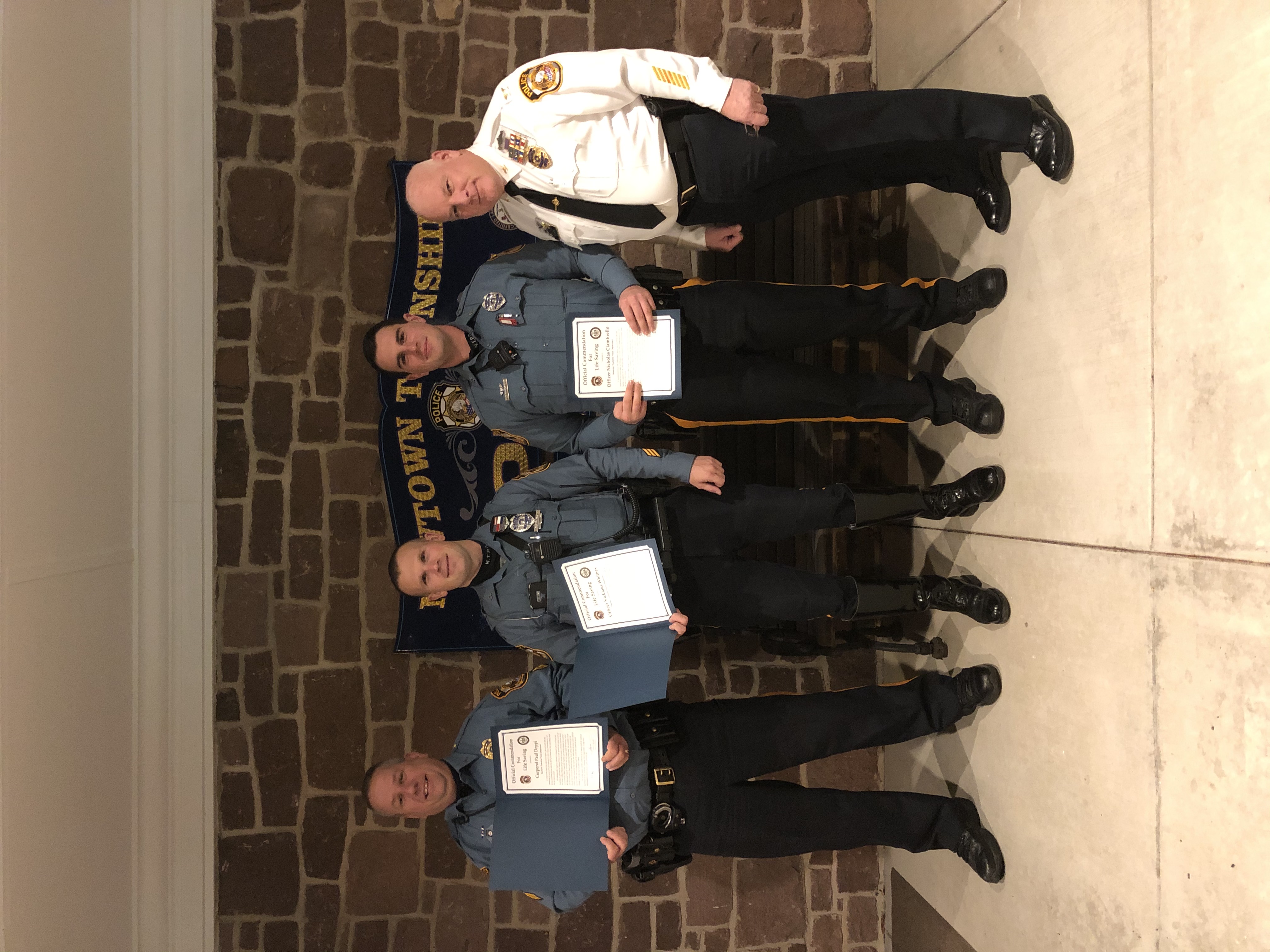 Officer Brent Helvig received a Commendation of Merit and Detective Christopher Bush received a Letter of Commendation for their exceptional actions on June 8, 2020, that led to the arrest of a wanted subject and the seizure of a significant amount of crystal methamphetamine. The incident began when Officer Helvig conducted a traffic stop on the Newtown Bypass on the operator for committing a vehicle code violation. After verifying several active arrest warrants, Officer Helvig took the subject into custody. A search incident to arrest resulted in the discovery of the crystal methamphetamine and a small amount of other narcotics. After the arrest, the assistance and teamwork Detective Bush provided to the investigation were remarkable. The subject was identified as a felon with prior convictions and a criminal history, and Detective Bush subsequently conducted interviews with the subject and a Bucks County Detective to further expand the investigation. The vehicle was secured and impounded for a search warrant that Detective Bush swiftly obtained. In addition to significant quantities of narcotics that were found, drug paraphernalia, a firearm, and other pertinent evidence were recovered.

Detective Christopher Bush and Officer Brent Helvig received Letters of Commendation for their exemplary actions on May 14, 2020, that led to an exceptional arrest. The investigation began when Officer Helvig observed the operator of a black Ford pickup truck traveling at a high rate of speed on the Newtown Bypass. He initiated a traffic stop and followed the vehicle until it came to a stop on Parkview Way. While Officer Helvig conducted the traffic stop, he observed a weapon and ordered the male out of the vehicle. The male refused to comply and fled the scene in his vehicle. A vehicle pursuit commenced and was ultimately terminated for community safety. As a result of Officer Helvig’s thorough investigation, the male operator was subsequently positively identified and an arrest warrant was issued for multiple charges, including carrying a firearm without a license, fleeing or attempting to elude a police officer, reckless endangerment, and reckless driving. Detective Christopher Bush assisted in the investigation and quickly secured search warrants for the subject’s residence and vehicle located in Langhorne, PA. Together, with the assistance of the Middletown Township Police and the South Central Emergency Response Team, they executed the search warrants and attempted to serve the arrest warrant. While the subject was not located on the property, several firearms were discovered and seized as evidence. On May 16, 2020, the subject ultimately surrendered himself to the police. Officer Helvig’s and Detective Bush’s tenacity and dedication to making Newtown and Wrightstown Townships safer was especially noteworthy throughout the investigation. 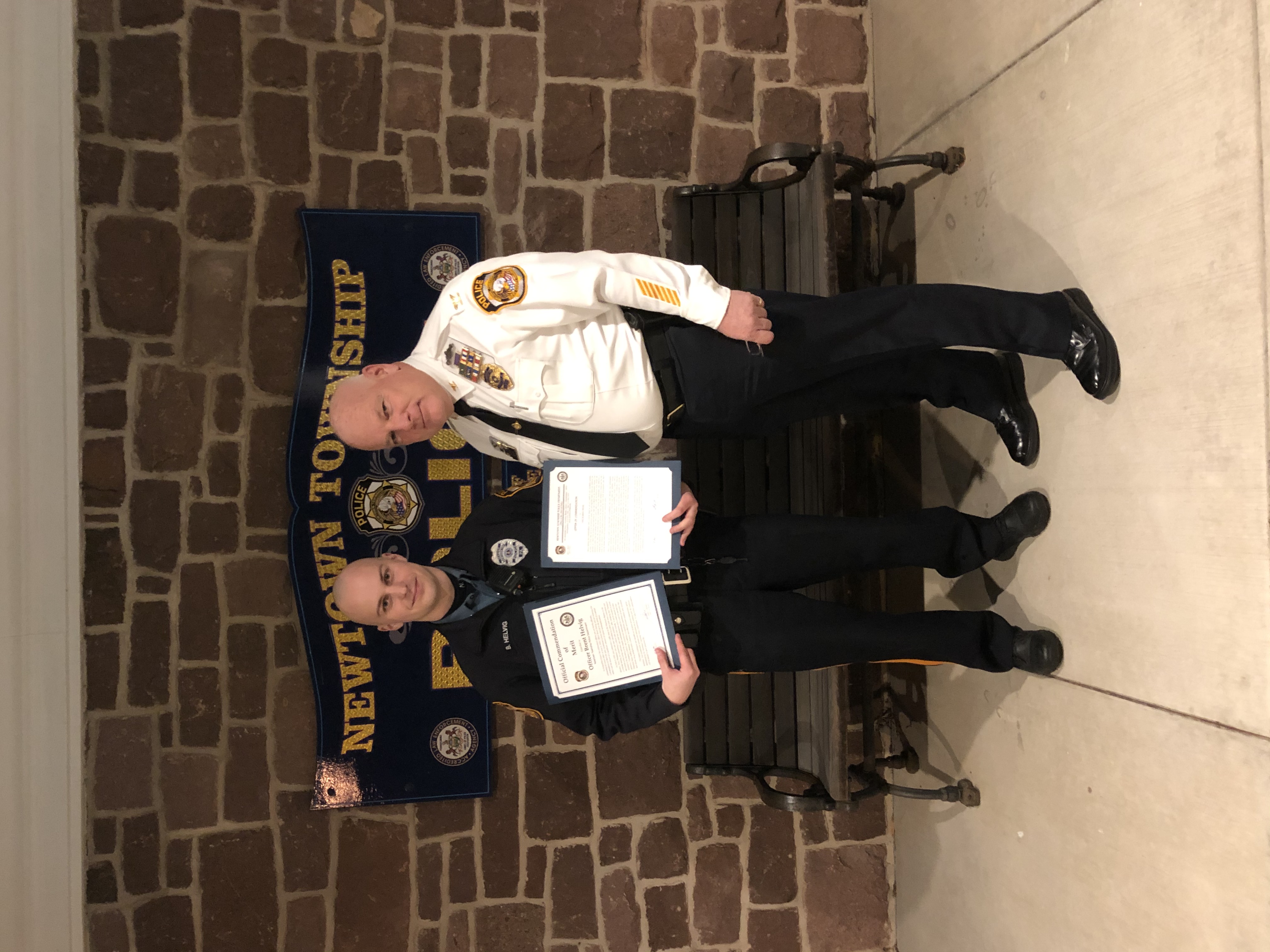 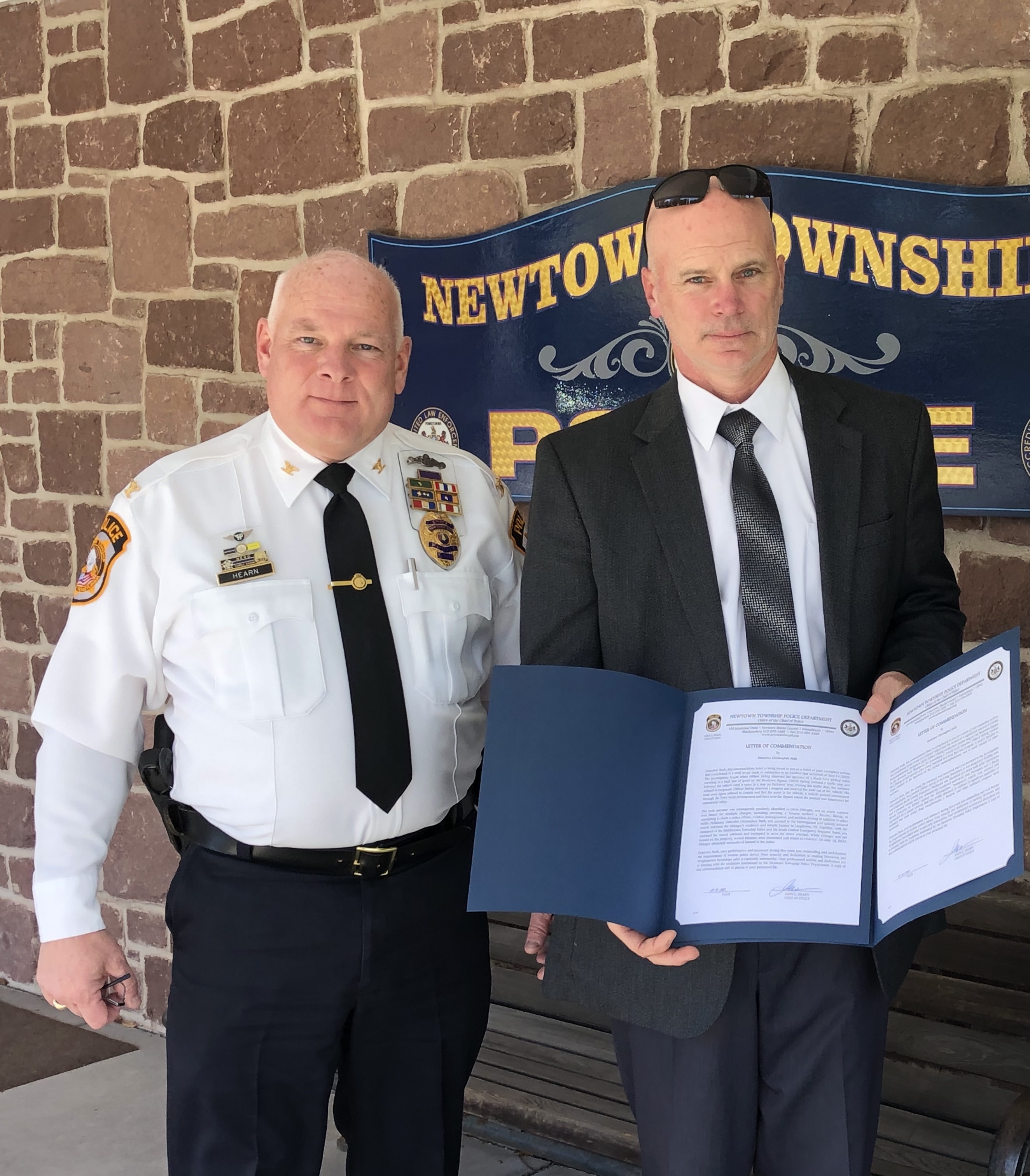 Detective Corporal Daniel Bartle received a Commendation of Merit for his exceptional actions on August 29, 2020, that led to the arrests of two subjects and the seizure of a significant amount of crystal methamphetamine. Detective Corporal Bartle was covering a patrol vacancy as shift supervisor when patrol responded to Homewood Suites for the report of a wanted person. As a result of his unwavering initiative, determination, and leadership, the investigation concluded with the arrest of the wanted subject and the arrest of the subject who hindered her apprehension. Subsequent search warrants resulted in the discovery and seizure of a significant amount of crystal methamphetamine, drug paraphernalia, and $8,000.00 US Currency. 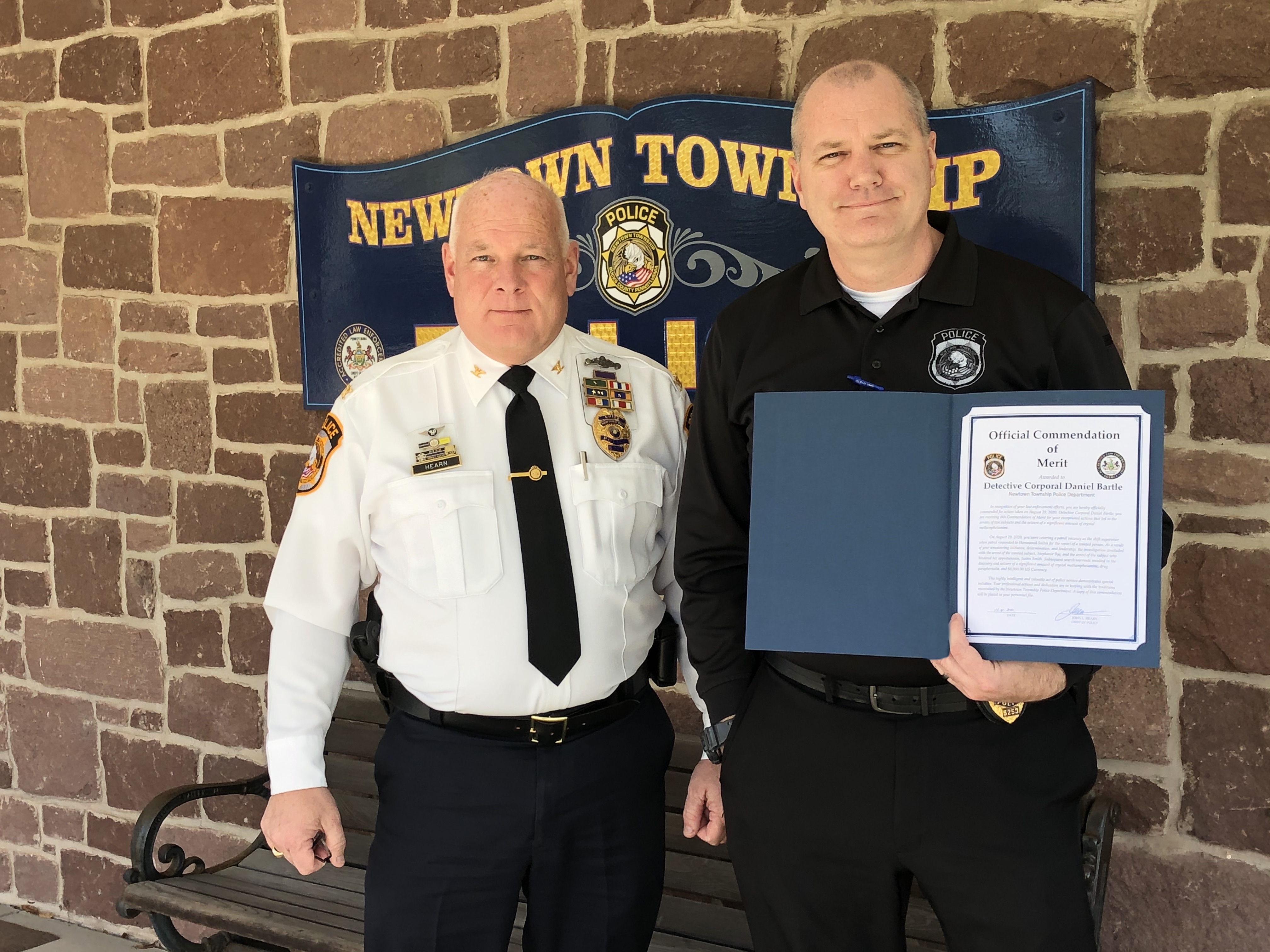 Sergeant Frank Ambrose was recognized for 25 years of service. 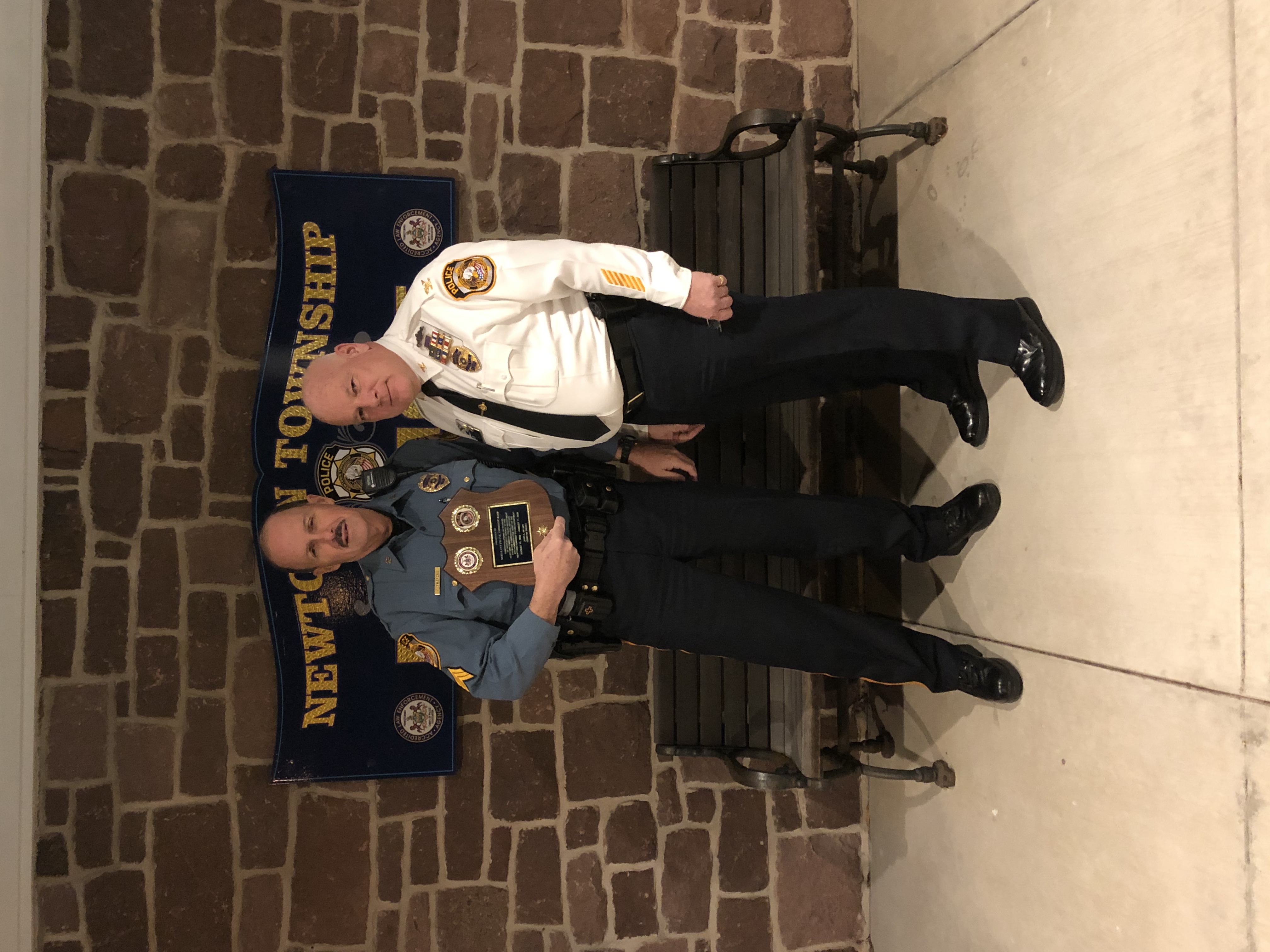 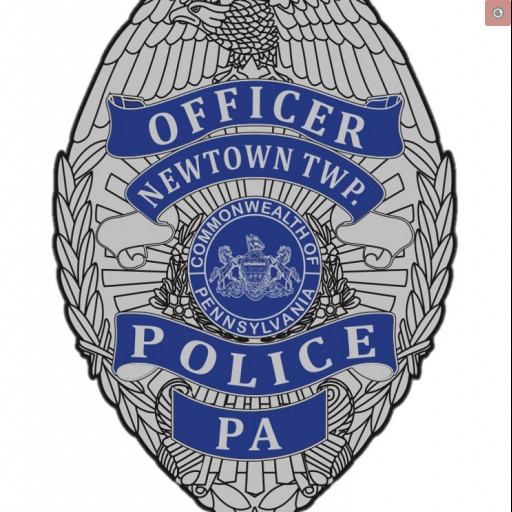