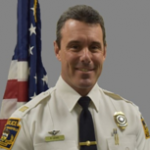 Bob Lewis has been a member of the Lower Makefield Township Police Department since 1994, assuming the rank of Captain in 2016. As Captain, Bob is second in command of the Department. He oversees daily operations, the Detective Division, Special Investigations, Internal Affairs and Special Events. Bob is also the Deputy Emergency Management Coordinator.

Bob is a graduate of Council Rock High School and Northwestern University School of Police Staff and Command. He is a resident of Langhorne, Pennsylvania