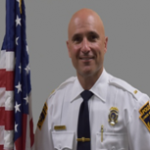 Jason Braim has been a member of the Lower Makefield Township Police Department since June 1994, assuming the rank of Captain in January 2022. As Captain, Jason supervises the Detective Division, DARE-Community Policing, Canine, Field Training and Firearms Unit.  He is also responsible for equipment and training.

Prior to becoming Captain, Jason was promoted to Patrol Corporal in 2006, Patrol Sergeant in 2009 and Patrol Lieutenant in 2016.   He has also served as a SWAT officer, Field Training Officer, Firearms Instructor and Canine Handler.  Jason is the coordinator of the Bucks County Explosives Canine Task Force.

Jason is a graduate of Neshaminy High School and Springfield Technical Community College.